New research finds that longer and warmer autumns make it less likely that green-veined white butterflies will survive winter to emerge in spring. The findings are published in the British Ecological Society journal, Functional Ecology. 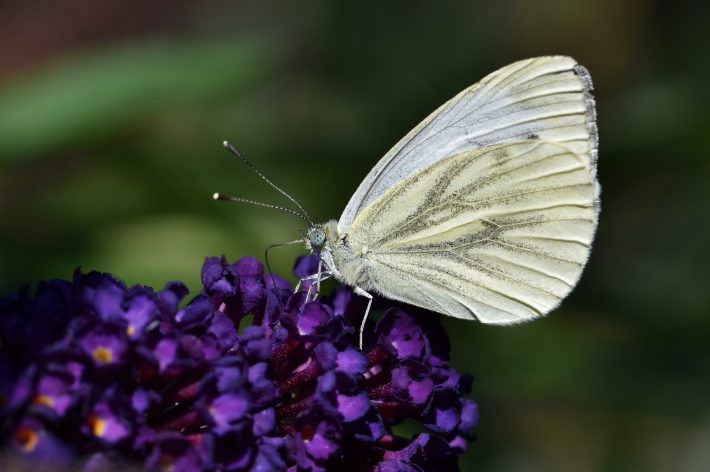 A new study by researchers at Stockholm University, University of Oulu, and Greifswald University has investigated the potential impacts of climate change on butterflies. In laboratory experiments the researchers exposed the chrysalises of green-veined white butterflies – which are common throughout the UK and Europe – to simulated autumn conditions of varying temperature and length.

Dr Matthew Nielsen at the University of Oulu, who conducted the research at Stockholm University, said: “Climate change is making autumns warmer and last longer, and it was this specific combination of conditions that had the greatest impact on the butterflies in our study. We show that stressful conditions experienced at one time of year can have lasting negative consequences at other times of year, linking changes in one season to consequences in others.”

Animals that enter a dormant stage through the winter are especially vulnerable to warming temperatures because this raises their metabolic rate, causing them to run out of energy faster. “Even though dormant animals use less energy than active animals, they use more when it’s warmer, and they can’t eat to replace that lost energy.” Explained Dr Nielsen. “It is already established that warmer winters are actually worse for dormant animals than colder ones, and our findings show that warmer autumns are potentially even more dangerous.”

In Sweden, where the study was conducted, the spring generation of green-veined white butterfly is usually the smallest generation because of the stress of winter dormancy. The authors warn that the increased mortality they observed after warmer and longer autumn conditions could therefore have a severe impact on the abundance of this species at a critical time of year.

Our findings show that warmer autumns are potentially even more dangerous than warmer winters for dormant animals.

In the study, the butterflies were exposed to temperatures as high as 25°C for up to 16 weeks. Although these simulated autumn conditions seem extreme, the authors say these temperatures already occur in southern parts of the butterflies’ range (as far south as Spain) and could occur further north under future climate change scenarios.

The researchers also say the timespan of 16 weeks of dormancy before the onset of winter conditions is not unreasonable for this species of butterfly. Some individuals can enter dormancy as much as two months earlier than others that go on to produce an additional generation before winter.

In the experiment, the researchers simulated various autumn conditions in a lab by placing groups of 8 to 11 chrysalises in chambers kept at 15, 20 or 25 °C for 1 to 16 weeks. They then subjected all 459 chrysalises to the same winter conditions for 24 weeks.

During the simulated autumn conditions, the researchers measured how much weight the chrysalises lost and how much energy they used. Finally, they followed the butterflies’ survival until they died or emerged as healthy adults during a simulated spring

Because the study was conducted in the lab and specifically designed to determine the limits of green-veined butterflies’ tolerance to warmer temperatures, there are some limitations to applying the findings to populations in the wild. For instance, the simulated conditions were constant rather than reflecting natural seasonal and daily variation. The researchers say that these variations could further intensify the metabolic costs of autumn conditions.

The researchers are now looking to explore the impacts of a warming climate on butterflies in more detail and look at the effects of multiple seasons. Dr Nielsen said: “In our study we only considered survival to adulthood, but there could be even more negative effects later in life, for example on the ability to find mates or the number of eggs laid. Studying how warming in autumn, winter, and spring interact will also be key to understanding the actual impacts of climate change on dormant animals.”

Can the read the full article here: