One big question is how to manage conservation alongside human populations. Dr. Kulbhushansingh Suryawanshi conducts research at the Nature Conservation Foundation, Mysore, India, and successfully applied for a large research grant to understand and mitigate the impacts of snow leopard (Panthera uncia) predation on livestock in South and Central Asia.

“Snow leopards occur across the high mountains of Asia covering an area of over a million square kilometres, overlapping with domestic livestock across this range,” Kulbhushansingh says. “Livestock predation by snow leopards is pervasive across this region and retaliatory killing of snow leopards is a key threat to the survival of this species.” 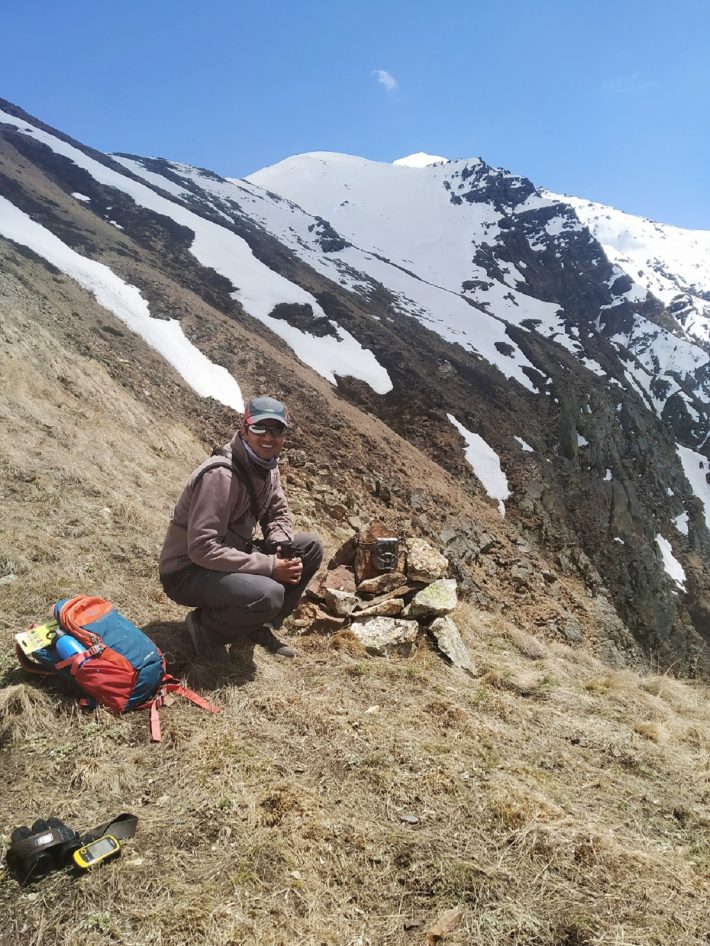 Using surveys, camera traps and censuses, the team covered hundreds of square kilometres, and their discoveries confirmed their predictions. “Our preliminary results suggest that wild herbivores show a predator mediate apparent competitive impact on livestock, ie. an increase in wild prey population will lead to an increased predation pressure on livestock,” Kulbhushansingh explains. “This is a novel result for ecology, especially considering that the data were collected on a rare and elusive large carnivore species.”

“This is a critical piece of the puzzle that conservationists and managers around South and Central Asia have been looking for,” Kulbhushansingh reveals.

Parts of the results were presented at the Presidential summit of the Global Snow Leopard Ecosystem Protection Program (GSLEP) in Bishkek. The event was chaired by the then president of Kyrgyzstan, and featured the Vice President of Afghanistan and representatives of all the 12 snow leopard range countries.

The methodological development driven by this work has provided the template for the Population Assessment of the World’s Snow Leopards (PAWS), an international project lead by the GSLEP and executed by the governments of the 12 range countries. Kulbhushansingh is now a co-author on the guidelines developed by the Indian Ministry of Environment Forest and Climate Change on the monitoring of snow leopard and prey across India, and was invited to a forum in China to share the insights with conservationists who are working on the Tibetan Plateau.

The grant offered more personal impacts too. “The BES research grant provided me the perfect launchpad that I needed as an early-career researcher interested in Applied Ecology,” Kulbhushansingh says. “Not only did it provide me with the necessary financial support for my research but also helped me become more confident about my ideas and approach to science. I feel really grateful for the opportunity.”