The impact of human activity on wildlife was also investigated Dr. Oju Ibor’s work at the University of Calabar, Nigeria. Oju used the African catfish (Clarias gariepinus) as an animal model to evaluate the effects of chemical contaminants from the disposal of solid waste.

“In many developing countries including Nigeria, solid waste dumpsites, landfills and conventional burning of waste have been adopted as the major waste management options, due to the lack of recycling approaches, inadequate policies and regulations,” he explains.

“Most often, these methods remain a significant source of several environmental contaminants of emerging concern and hazardous materials to human health and wildlife.” 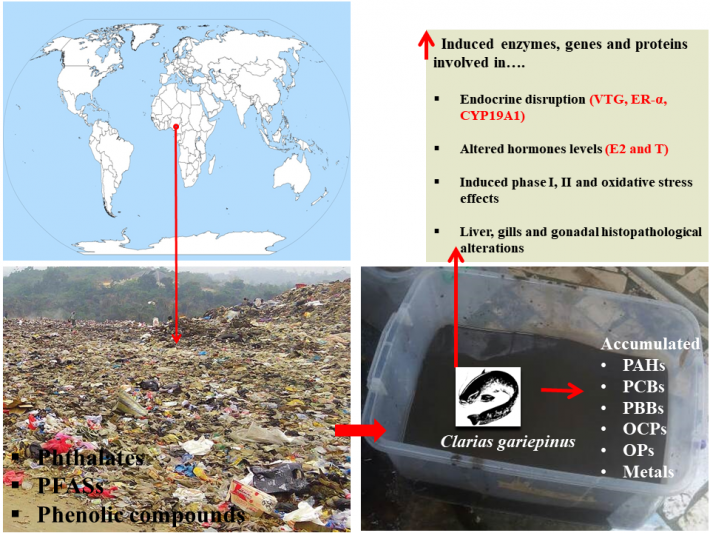 His study showed that one specific solid waste dumpsite in Calabar, Nigeria, contained several environmental contaminants such as perfluoroalkyl substances (PFASs) and phthalate esters (PEs). These were found to induce reproductive, development, oxidative stress and endocrine disruptive effects in fish, implying that the environmental contaminants present at the dumpsites may cause similar effects in exposed humans and wildlife.

As well as publishing three papers from the research, Oju was able to attend a conference in the USA where he gave two presentations on the subject. Further impacts were felt regionally and locally, as the project informed the Nigerian National Environmental Standards and Enforcements Agency’s environmental management planning, and empowered people living in the area.

“The results of this project were used for local community sensitization mostly for people living and farming around the dumpsites,” Oju says. “This involved educating them on the direct effect that may arise from exposure resulting from such environmental contaminants and other health problems arising for improper waste deposition.”

Oju emphasises that this research will help inform national decisions regarding sustainable environmental management. “I am very much grateful to BES for this great opportunity.”