A scientist’s view of the European Parliament: How politicians approach data

This post is the first in a series from Stuart Auld, Research Fellow at the University of Stirling, who recently shadowed Linda McAvan MEP as part of the BES’s Parliamentary Shadowing Scheme.

The role of politicians is to formulate, debate, and enact policy. For this process to work effectively, they need high-quality, unbiased data. The way politicians choose and use data therefore has a profound influence on the world we live in. Likewise, the way scientists package their data will affect how policymakers view those data. This post discussing science-based policy comes from my time at the European Parliament as part of the British Ecological Society’s Parliamentary Shadowing Scheme.

“Evidence-based policy” is a commonly used term nowadays. I cringe when I hear it, because I think all policy should be evidence-based. The term is an extension of “evidence-based medicine” which is equally scary (what were we basing medicine on in the past – witchcraft?)

The idea is there is a single large pool of data that can be analysed and interpreted to generate policy. However, one can take different samples of the data and come to wildly different conclusions about patterns and processes; this will lead to different policy outcomes (see below). 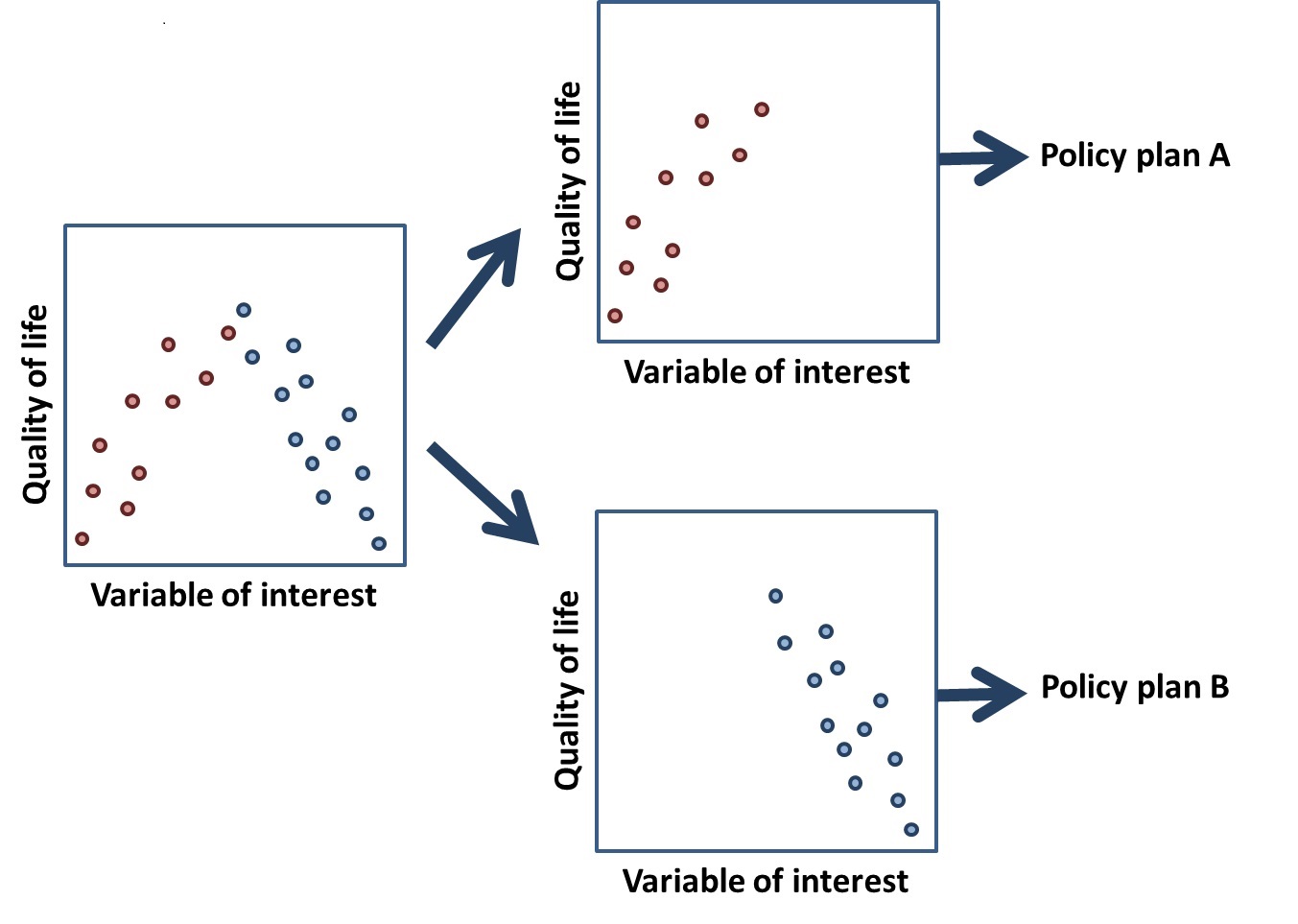 The way data is selected and used is therefore of paramount importance. The problem is that many policymakers are not scientists and therefore haven’t been trained in how to select and interpret data – it’s not their main focus. Likewise, most scientists are not trained to present data to policymakers – their main focus is to communicate with other scientists. Important aspects of patterns and process can therefore get lost in translation. This is particularly true when describing uncertainty and complexity associated with patterns in data.

The difficulties of uncertainty and complexity

Policymaker: Can you say for certain that this is the case?

Policymaker: So the evidence is inconclusive?

Scientist: There is a 5% chance this relationship could have occurred by chance alone, so the association between X and Y is compelling.

Policymaker: So if we boost X, we’ll get an increase in Y?

Scientist: Well that depends on Z.

This conversation isn’t particularly useful for either the Scientist or the Policymaker. Bridging the gap in approaches requires specific training for both parties. Fortunately, this is starting to happen.

Identifying consensus in the scientific community

Let’s consider the following statement: “Humans are contributing to global climate change”. There are scientists that are sceptical as to whether this statement is valid, but they are in the extreme minority. The vast majority of climate scientists agree that climate change has a significant manmade component. On more than one occasion, I heard MEPs in the European Parliament say “it depends which scientist you ask”, which while technically true, massively misrepresents the general view of the scientific community. Does every single climate scientist agree that manmade climate change is a thing? No. Is there an emerging consensus? You betcha: we are warming our planet.

Having identified the gap between scientists and policymakers, we must now think of ways to fill it. First, we need scientists to better communicate their findings to non-scientists. More and more scientists are achieving this, but it is a skill that takes time to develop. Also, we need policymakers to think carefully about the evidence they use to formulate and debate policy before the policy has been drafted. This is also a skill that takes time to learn and develop. So what can be done in the meantime?

I argue that learned societies can play an important role in providing scientific advice.  For example, if a policymaker wants to understand how to deal with invasive species (which can sometimes, though not always, threaten native species – e.g. North American squirrels transmitting diseases that kill our native red squirrels), then get in touch with the British Ecological Society and get the evidence. There are numerous scientific learned societies across the world whose raison d’être is to communicate their science to as wide an audience as possible. Use them.

As ever, comments are particularly welcome.