2021 has been dubbed the ‘super’ year for nature, but what does this mean for science policy in Scotland?

This virtual two-part ‘Pie and a Pint‘ (PAAP) series hosted by the BES-SPG and CIEEM will aim to explore what ‘COP’ is, the effect it has on the science policy interface in Scotland and how it will be implemented in practice. Find out more about the first part in this series below. 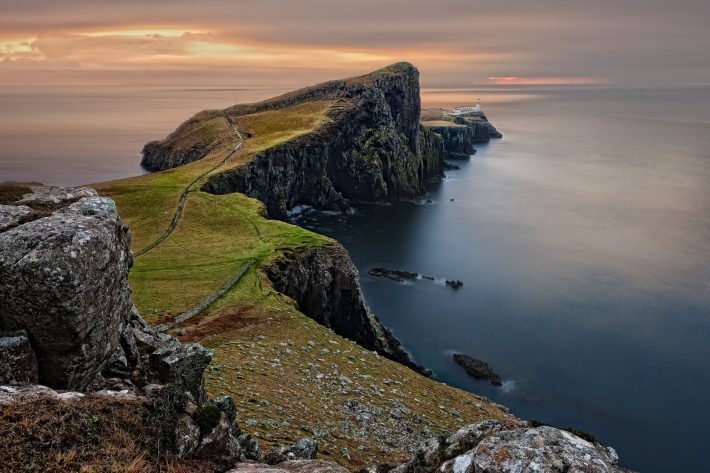 2021 is a crucial year for global environmental policy. Two vital international conventions, the Convention on Biological Diversity (CBD) and the United Nation Framework Convention on Climate Change (UNFCCC), are both hosting Conferences of the Parties (COPs) that have been delayed by the pandemic. In November, the world’s attention will turn to Scotland as activists, politicians and diplomats descend on Glasgow for the UNFCCC’s COP26. COP15 of the CBD begins virtually in October, then face-to-face meetings will take place in April-May 2022 in Kunming, China.

As the host of COP26, Scotland has a key role in what has been dubbed ‘The Super Year for Nature’. The Scottish government, other public bodies, NGOs and civil society are all gearing up to showcase what the nation is doing to tackle the climate emergency and the role that a small country can play. Scotland also has to decide how to apply the international policy directions agreed upon at the two COPs. The BES’s Scottish Policy Group (SPG) and the Chartered Institute of Ecology and Environmental Management (CIEEM) are hosting a virtual two part ‘Pie and a Pint’ (PAAP) series to explore the two COPs, the role of Scotland, and their effects on the country.

The first part took place on 28th September and started with three talks from experts on the impacts of the climate and biodiversity emergencies in Scotland. Debbie Bassett of NatureScot opened the evening with an outline of COP15 and COP26. NatureScot will be present at COP26 and is emphasising that ‘The twin Climate and Nature Crises are coupled and must be tackled together: we tackle both or we tackle neither.’ This exemplifies the interconnectedness of the two COPs which this PAAP series is striving to showcase. Their activities have an emphasis on nature-based solutions (NbS), including a Scottish Bonsai Landscape that showcases these from mountain to sea. 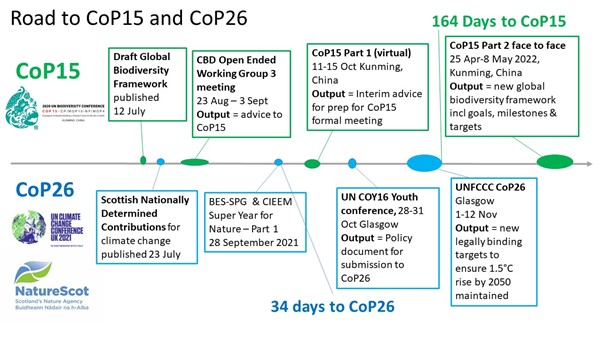 In the second talk, James Curran, Chair of the James Hutton Institute and honorary fellow of Scottish Environment LINK, and Tamsin Morris, a partner at Walking-the-Talk consultancy, presented on Scottish perspectives on climate change and biodiversity. Scotland has a Biodiversity Intactness Index of just 56% and climate change further threatens species such as the golden plover. Hotter drier summers will potentially cause reductions in crane fly numbers, an important food source, for golden plover. The link between the intactness of ecosystems and climate breakdown was again brought to the fore. Atmospheric CO2 levels have an annual cycle, declining during northern hemisphere summers as terrestrial ecosystems soak up CO2 through leaf, plant and root growth. Since 2006, this annual cycle has declined, suggesting that the ecosystems of the northern hemisphere are losing their ability to draw CO2 out of the atmosphere. 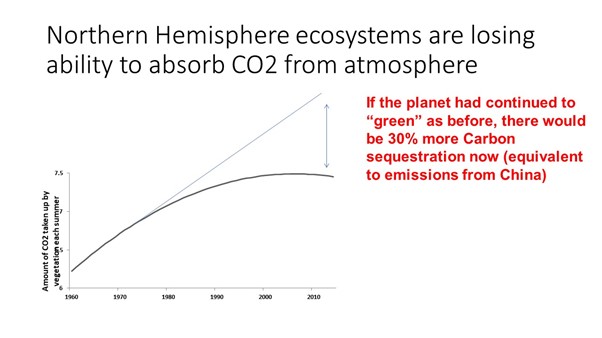 In the final talk, Des Thompson and Clive Mitchell from NatureScot, staged an entertaining and informative back-and-forth about what needs to be done to ‘bend the curve’ on biodiversity loss. There was fascinating discussion of how conservation can learn lessons from those tackling the climate emergency, including securing public engagement (think Greta Thunberg) and mainstreaming policy and practice. Conservation also needs to routinely use an evidence-based approach. All baselines in conservation are in some sense arbitrary, and when humans have the ability to fundamentally alter ecosystems, we have to use resources such as the Conservation Evidence database to show help us set targets and design interventions. 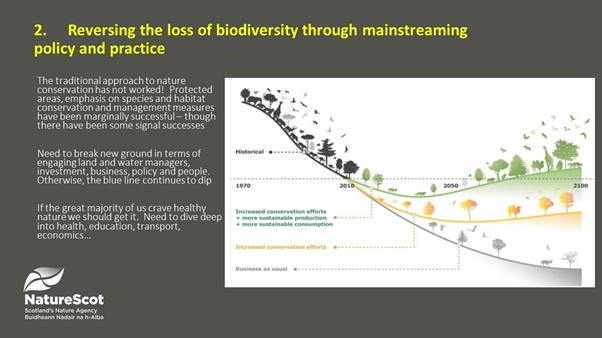 The second part of the event took place in breakout rooms, in which participants discussed their views on what Scotland needs to do to meet its biodiversity and climate change targets. Wide-ranging discussions covered many aspects of environmental management and governance, but one theme that arose many times was agriculture. Land management is key to addressing the biodiversity crisis, but farmers are often cast as the ‘bad guys’ in environmental circles.  Agriculture and other land management industries do cause undeniable environmental damage, but much of the public is disconnected from how food is produced and may not understand the pressures faced. Conservationists need to work with farmers, foresters and others to build more sustainable industries. Potential solutions that were suggested included circular economy concepts, such as finding uses for mutton, reducing meat consumption and even land reform, whether that be introducing conditions on land ownership or encouraging changes in ownership itself. Finally, the environmental industry itself needs to change. Some participants said that we need to move away from voluntary work and short terms contracts for students and early career researchers, otherwise diversity will never be improved.

Scotland is a small nation, but it does historically punch above its weight in lots of areas. It may be nature-depleted at the moment, but the discussions at this PAAP event showed the opportunity that the country has exhibit its progress towards tackling the twin crises of climate change and biodiversity loss.