Find out what happened at the 2019 Summer School for students aged 16-18. From fieldwork, to lab analysis, policy to careers work, it was jam packed week! 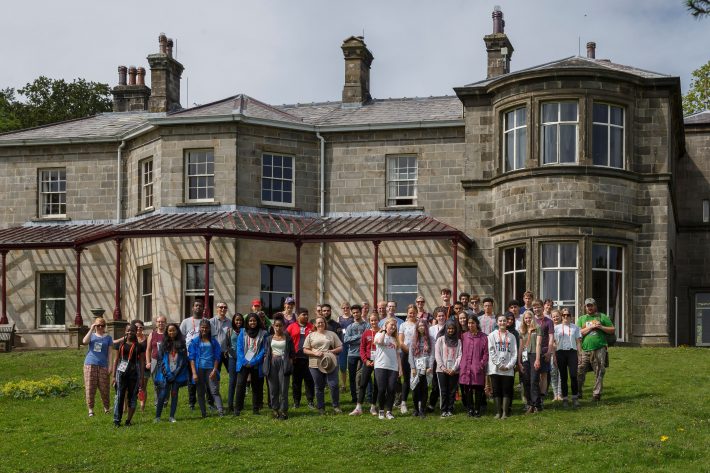 Put simply, it was unbelievable how good this week was. I feel like it was lucky that I picked up a little note about the Summer School via a Royal Society of Biology newsletter, and with little optimism I contacted the BES to express interest fully expecting that our geographical isolation was lead to a negative response, but the BES staff were stars. Right from the outset, they put together a travel plan to ensure the students would be able to go to Malham for the week. Coming from Jersey, this in itself gave the students the opportunity to travel on a train, with connections!

The opportunity for a fully-funded residential of any sort generally bypasses students from Jersey. Coupled with the limited Higher Education on the Island, there is little to enthuse students about a career in Science beyond lessons or a Skype a Scientist session, so for a week meeting researchers and policy makers, this week gave each and every student the genuine insight into Ecology.

Within Secondary Science, Ecology always seems to fall at the end of a course, be it GCSE or A level, and with the increased content within both of these qualifications, Ecology is more often than not squeezed to the bare minimum with teachers often justifying it to themselves that children already know it by the time they get that far, but they don’t. The childhood experiences of playing in woods or pond-dipping have definitely waned since consoles hit the market and social media took over the world. Undoubtedly this is having an impact in the value young people give to the outdoors and nature, which is why Ecology matters (to me).

The week itself was a myriad of learning experiences. The opening address was even given by the current president, adding to the gravitas of the week. Richard Bardgett spoke passionately about soil to a group of 30 young people from across the UK, many of them weary from their travels, but they hung on every word spoken as they begun to understand just how undervalued soil is in maintaining everything above ground, including us as humans.

The early mornings and late evenings were utilised by optional extras, but generally well attended by the students and teachers alike. Every single one of these experiences offered something that the average teenager does not see, undoubtedly the batwalk or camera trapping would rank highly amongst the students but I was particularly impressed with the moth traps run by the Royal Entomology Society. This activity built on the daytime exploration for invertebrates, but there is something special about finding life that you don’t see. Observing the students meticulously isolate the moths the following morning, developing their own rationale for segregation into relatively large taxonomic groups before working their way through guidebooks to identify these moths to species level all before 7 o’clock in the morning showed me how much resilience young people already have when they have the opportunity to show it.

The daytime activities had balance between the science and the application demonstrating the wealth of research and industrial ecological careers available to the young people. An example of this was a kick sample of a local stream and subsequent identification of indicator species to assess the water quality and discuss potential factors that explain the assessment with Cecilia Medupin. This was quickly followed by computational modelling of flooding events in Skipton with Gary Priestnall and Alex Scott. The experts from every university and firm during the week spoke to the students as equals, giving them that sense of a professional forum for discussion, something they really took on-board. I am still smiling when I reminisce about the students walking back from the bog, where they had just discussed the anthropological factors affecting the conservation of the water vole. There were only 10 of them, yet half of them were actively discussing policy on the walk back up the road, 16 and 17 year olds discussing policy with other teenagers that they had only just met!

The communication of ideas was best highlighted by Tarnwatch. It was great watching the adults and students alike describe their day in a novel scenario for everyone involved. Undoubtedly this added to the sense of belonging as they contributed in their own way, either in front of the camera or behind it, to these well polished broadcasts in their matching t-shirts.

I know that my students are more fortunate in their surroundings compared to many students from the cities, but underlying limestone geology, complete with caves which none of my students had experienced before, makes the entire ecosystem novel for all. With the budgetary squeeze on schools, field trips are quickly becoming a thing of the past, nevermind exploring a little further afield. Even getting a minibus offsite is a burden many of my peers are unwilling to take, so for a week of mini-field trips, there was nothing but excitement.

Forgetting about the students for a moment, the impact this week has had on us teachers has been profound. Every time I request CPD, I get told that there is no money, not for travel and not for cover, so when the opportunity arises in a holiday, foolishly I want to be there and will happily make a holiday of it. Simply being with active members of the society for a week gave me a chance to discuss a raft of ideas for lessons and projects stretching beyond A level students to increase engagement within my community. I was astounded how positive everyone’s replies were, it genuinely raises your optimism for teaching at a time when morale in the profession is low. The shift in my colleagues at the Summer School was evident as we collaborated to build our own takeaways from this exceptional week. I am proud to say that we have actively stayed in touch and are sharing our resources in our own little SIG.

The route forward for increasing ethnic diversity in the environment sector

The route forward for increasing ethnic diversity in the environment sector

The BES commits to a route map towards empowering and supporting ethnic minorities in the sector.

Researchers share how they crafted a guide that prioritizes safety for field researchers from marginalized groups.

A new study points the way for reckoning with Indigenous sovereignty and US public lands through place names in national parks.