This post is a press release from the authors of Journal of Animal Ecology paper “Earlier nesting by generalist predatory bird is associated with human responses to climate change by Shawn H. Smith et al.

Milder winters have led to earlier growing seasons and noticeable effects on the breeding habits of some predatory birds, according to research by Boise State biologists Shawn Smith and Julie Heath, in collaboration with Karen Steenhof, and The Peregrine Fund’s Christopher McClure. 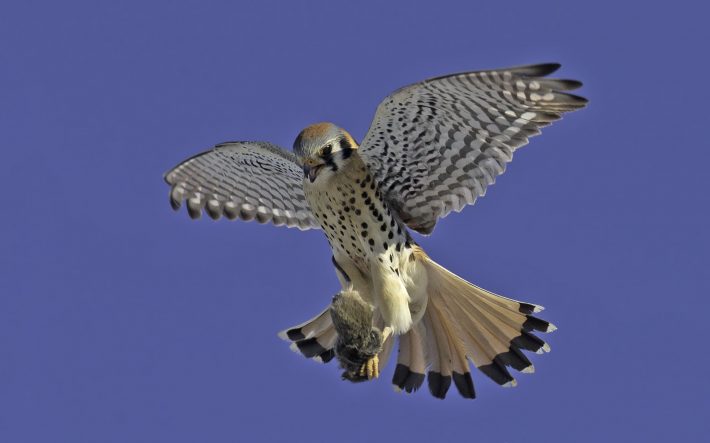 Smith and his co-authors studied the American kestrel (Falco sparverius), also known as a sparrow hawk, because the bird is widespread and responsive to environmental change. Their question was whether the warming climate had led to changes in prey abundance and a corresponding change in when the birds nested.

Their study looked at kestrels that nested in both non-irrigated shrub and grasslands and those that nested in irrigated crops and pastures. Using data from remote satellites to determine the greenness of different types of vegetation they were able to determine the start of the growing season for different areas. That is important because peaks in vegetation greenness correspond with peaks in kestrel prey, like small mammals and insects. They then looked at how that matched up with kestrel nesting patterns.

Results show that over the period of 1992-2015, the greenness on irrigated lands occurred earlier because of earlier planting of crops following relatively warm winters, but there has not been a change in green-up on non-irrigated lands. Kestrels seemed to “track” the changes in irrigated lands and were nesting 15 days earlier than they used to nest. Although this might not seem like much of a shift, the earliest nesting kestrels can now raise two broods per year instead of one.

“Kestrels may preferentially track prey in irrigated lands over non-irrigated lands because of higher quality prey on irrigated lands,” Smith said. He noted that the earlier availability of prey could also be overcoming former constraints on early nesting, such as seasonal declines in natural reproductive rates or competition for high-quality mates.

The study is one of the first concrete examples of an association between human adaptation to climate change and shifts in breeding cycles of wildlife. “Moving forward, we need to consider that animals will be affected by both climate change and our own adaptations to a warming planet.” stated McClure.