Travel information to assist you with your journey to Ghent. 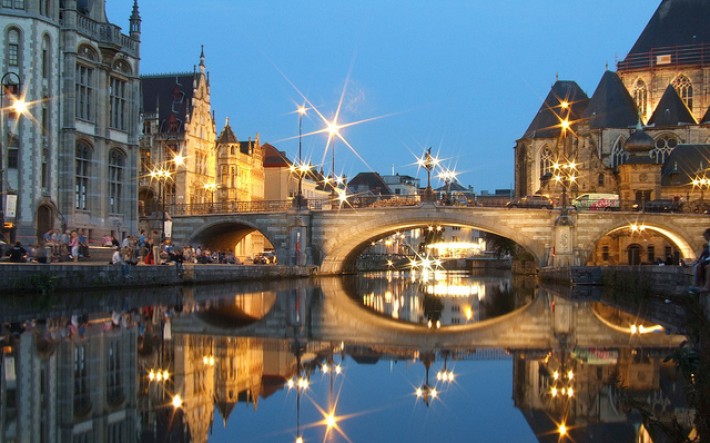 One of the great features of Ghent it how accessible it is, not only to London and Europe, but worldwide with direct transport links to Brussels Airport. We have listed some travel information below with links for further information.

Ghent is easy to reach by train from all Belgian and European cities and is only half an hour from Brussels South Station. There are also frequent direct trains to Brussels Airport, for those flying into Belgium from further afield.

The Man in Seat Sixty-One… is a great website for information on train travel in Europe and worldwide.

TIP: Fastest trains in Belgium are indicated on the electronic timetables with ‘IC’ (Inter City) followed by ‘IR’ (InterRegio) trains. ‘L’ trains are slowest and have most intermediate stops at local train stations.

RailEurope is a good site to begin planning your trip, combining the maps, schedules and fares for over 50 different train companies across Europe. If you are travelling within Belgium you can use the Belgian Rail website.

From London you can be in Ghent in under 3 hours, with return tickets as low as £100 if you book in advance.

If you are coming from the UK, you can book a ticket to Ghent using the Eurostar service from London St Pancras. When booking your ticket select that you are travelling to ‘Any Belgian station (via Brussels)’. The times provided will show you the 2 hour trip to Brussels South. You will then need to get a 30 minute train from Brussels South to Gent-Sint-Pieters, which is included in your ticket price.

TIP: The main and busiest station in Brussels can cause some confusion as it is referred to as Bruxelles-Midi, Brussel-Zuid and Brussels South. These are all the same station and this is where you need to be for all Eurostar services.

TIP: The trip from Brussels South to Gent-Sint-Pieters is one to keep an eye out for the ‘IC’ (Inter City) or ‘IR’ (InterRegio) trains on the electronic timetable. These take under 30 minutes, but get on the ‘L’ trains by accident and you’ll be looking at an hour (we know, we’ve done it!). You can also check the times on the Belgian Rail website.

A number of companies provide bus journeys to over 500 European destinations on a daily basis, including Ghent. The two main coach services for low cost travel to and within Europe are:

As an idea, coaches from London take around 6 – 7 hours to travel to Ghent and cost about £25 each way.

Ghent is only 45 minutes from the international airport of Zaventem – Brussel Airport, where flights arrive from and depart to more than 70 destinations worldwide.

The other Belgian airports (Ostend, Antwerp and Liège) receive flights from various European cities and have easy direct connections to Ghent.

Ghent is located on the intersection of two major European motorways: the E17 connects Northern Europe to the South, and the E40 runs from the North Sea right across to Eastern Europe.

The centre of the city of Ghent is a pedestrian area. The P-route leads you to the various car parks that give access to the city centre. As soon as you enter the city, the digital signs of the P Route parking guidance system will quickly and conveniently direct you to the parking facility of your choice. If you wish to enter a pedestrian zone with a motorised vehicle between 11 am and 6 pm you will need a permit to avoid getting a fine. Parking on public property in a pedestrian zone is not permitted.

The hotels in the city centre remain accessible by car. You need a permit to use these hotel car parks. Permits are available from the hotel. When booking, simply inform the hotel that you require a parking space and state your registration number. If you are arriving in a rental car, you will need to let the hotel know.

TIP: During rush hour you can easily double travel times, so try to travel outside of these hours.