Lovers of nature and comedy alike are guaranteed to have a ball at this virtual one-of-a-kind caberet.

** This event has now passed, and a recording is not available online due to content restrictions **

Join our comedians as they translate their lives as natural scientists into weird and wonderful performances in this one-of-a-kind comedy show!

If you like comedy, and you like nature, this is the show for you. Laugh and learn as you watch real scientists showcase their knowledge about animals, plants, and their interactions with our planet.

ECOmedy Night will be hosted by the brilliant, award-winning musical comedian and radio presenter Emer Maguire. With sell out shows at the Edinburgh Fringe under her belt, Emer knows just how to get a comedy night started.

This side-splitting show will also feature the excellent Dani Rabaiotti (author of bestsellers True of Poo and Does it Fart?), the fantastic Hana Ayoob (science communicator and presenter of the hilarious Zoo-Lol-Ogy), the awesome Zara Gladman (comedy writer and performer with over 8-million views on BBC The Social), and the incredible Khalil Thirlaway (biologist and presenter for the Natural History Museum, London). 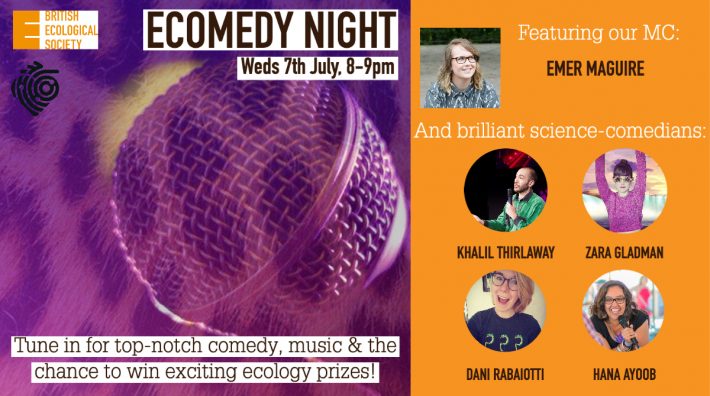 Our performers for the night:

Emer Maguire is an international award winning science communicator, and a double Irish Radio award-winning BBC presenter. She is a four time TEDx speaker, a conference and event MC, presenter of the podcast Elementary My Dear and a musical comedian with a sold out Edinburgh Fringe run under her belt. Emer is also a qualified and practicing Speech and Language Therapist. In other words, she loves communicating in any way she can. With years of experience in a multitude of mediums, Emer is a communications expert, and a top-of-the-line comedy host.

Hana Ayoob is a science communicator with a background in Zoology, an events producer working in science communication, and even an illustrator inspired by biology. Hana is a regular on stage, performing in and hosting comedy events such as Zoo-Lol-Ogy.Hana is particularly passionate about equality, diversity and inclusion within science which led her to co-found Minorities in STEM, a network to support BAME individuals working/studying in STEM fields.

Dani Rabaiotti is an ecologist, science communicator, and author. As a researcher at the Zoological Society of London, Dani looks at the impact of climate change on African wild dogs (as part of the Hot Dogs project). As an author, Dani has published numerous entertaining books, including Does It Fart? which reached the New York Times Bestseller list and was also developed into a kids TV show on CBC. As a keen science communicator, Dani frequents the stage for talks and events about her work and books and has featured on a number of television and radio shows as a zoological consultant and writer.

Zara Gladman has a PhD in Zoo-LOL-ogy and a BSc in dog memes. Her comedy tackles Very Important Issues like which house plants are the coolest and what even are jellyfish? In 2021 she was highlighted by Chortle UK for her “incisive, funny and relateably honest videos” shared during the lockdown. She has performed at the Edinburgh Festival Fringe, The Stand Comedy Clubs in Glasgow and Edinburgh and even Edinburgh Zoo! Her comedy videos for BBC The Social have been viewed more than 8 million times.

Khalil Thirlaway is an immunologist by training, parasitologist at heart, biologist through and through. By day, Khalil produces and presents live and online content for the Natural History Museum, London. By night, all the stuff that was Too Weird For Work bubbles to the surface…