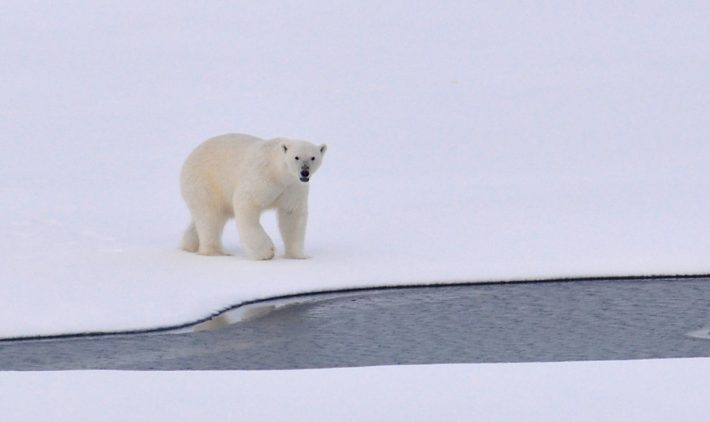 Harvesting polar bears for subsistence is possible without compounding the negative effects of climate change, says a new study published today in Journal of Applied Ecology. Scientists at the U.S. Fish and Wildlife Service, U.S. Geological Survey and University of Washington reached this conclusion based on a new model of how polar bear populations work. “The goal was to better understand harvest within the context of habitat loss,” said Dr. Eric Regehr, the study’s lead author.

“When used with accurate population data, our model is a tool that can help managers meet the needs of subsistence users while imposing little additional risk to wildlife populations.”

Polar bears were listed as “threatened” under the U.S. Endangered Species Act in 2008 due to observed and projected loss of Arctic sea-ice habitat from climate change. Although sea-ice loss is the primary threat to the species throughout its range, the near-term response of the 19 polar bear subpopulations has not been uniform due to variation in the local conditions. In situations such as for the polar bear where conditions are dynamic and evolving, agencies need tools that consider all the variables affecting a population. This includes subsistence harvest of polar bears – a traditional practice that has nutritional, cultural and economic importance to Native people throughout much of the Arctic.

To address the challenges of conservation and recovery of polar bears, the U.S. Fish and Wildlife Service convened a Polar Bear Recovery Team composed of 15 partner organizations, which released a Conservation Management Plan on 9 January 2017. The current study played a key role in the Plan, with results suggesting that it is possible to minimize the risk that harvest will accelerate population declines driven by loss of the polar bear’s sea-ice habitat. To accomplish this balance, the authors recommend calculating a harvest percentage that considers a population’s health, calculating a harvest number based on a current estimate of population size, and adjusting the overall approach based on the quality of information available (e.g. setting lower harvest levels when data quality is poor).

In the longer term, addressing climate change is the single most important action for conservation of this ice-dependent species,” said Dr. Michael Runge, co-chair of the Polar Bear Recovery Team and co-author on the current study.

“In the nearer term, our results can help the diverse partners in polar bear conservation find management solutions that work for both bears and people.”

Feeding wild animals could drive artificial selection for harassment behaviour and poses a serious risk to human and wildlife well-being.

As the risk of extinction for crocodilians grows, the unique ecosystem roles these reptiles fulfil are also at risk.