At a recent meeting in the House of Commons, Chairman of the Environment Agency (EA) Lord Chris Smith, outlined plans to improve the EA’s delivery functions throughout his tenancy as Chair.

Lord Smith described the EA as an “unusual body” and a “diverse beast,” insofar as it is “part deliverer, part regulator and part adviser.”

The EA is said to be fairly bureaucratic at the moment, and Lord Smith is optimistic bureaucracy can be reduced, with more resources allocated to delivering EA objectives.

There has reportedly been some opposition from EA Officers towards moves to incorporate micro-hydro-electric generators in river systems. As Lord Smith pointed out, the need to combat climate change through reducing emissions must be balanced with other concerns. Some researchers believe that sensitive use of small hydro-electric installations would have a limited impact on the ecology of the river system, and this initiative will doubtlessly be explored further.

Lord Smith mentioned the need to improve communications with local communities. Local knowledge holds immense value in terms of setting planning and conservation objectives, and must be considered critically alongside scientific recommendations.

Touching on the subject of the third runway evidenced Lord Smith’s genuine commitment to social, ecological and environmental concerns. Aside from the issue of increased greenhouse gas emissions, Nitrogen pollution from emissions already presents a very real and serious health hazard to residents proximal to Heathrow. A third runway would massively increase the output of harmful noxious gases such as Nitrogen dioxide and breach European Environmental safe emissions limits.

In terms of Climate Change, the EA’s primary responsibility is to help those unable to cope with the consequences. Lord Smith backed the use of Carbon & Capture and Storage technology in new coal-fired power stations, although he recognised the existing shortcomings in available technology.

Speaking of successes, Lord Smith announced success in reducing input of pollutants to the environment, highlighting a 59% and 48% reduction of Mercury and Cadmium respectively, to our freshwater systems over the last year.

In terms of regulating polluters, Lord Smith expressed the need to pursue the “bad guys”, i.e. the worst polluters, with more frequent visits from EA officers, whilst reducing inspections to companies and individuals showing marked improvements.

When asked on how to bridge the gap between EA ‘field agents’ and policy-makers, Lord Smith said that The Environment Agency will be a statutory consultee of the Planning Act. This will hopefully streamline communication

The talk was broad in scope, President-elect Barack Obama even got a look-in (i.e. alluding to Obama’s policy plans to Ministers can be an effective persuasive tool!). Overall the outlook for the EA looks set to be very positive whilst Lord Chris Smith remains as Chair.

Check out the EA’s website here for further news and updates.

Seasons Greetings from the BES Science Policy Team to readers of the Blog! 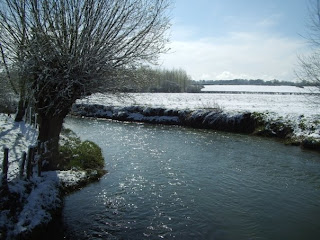