Regulated hunting of a recovered black bear population represents a pragmatic tool to help control population size, and when coupled with incident-response management and educational programming, reduces the number of nuisance bear reports, according to new research published today in the Journal of Applied Ecology. 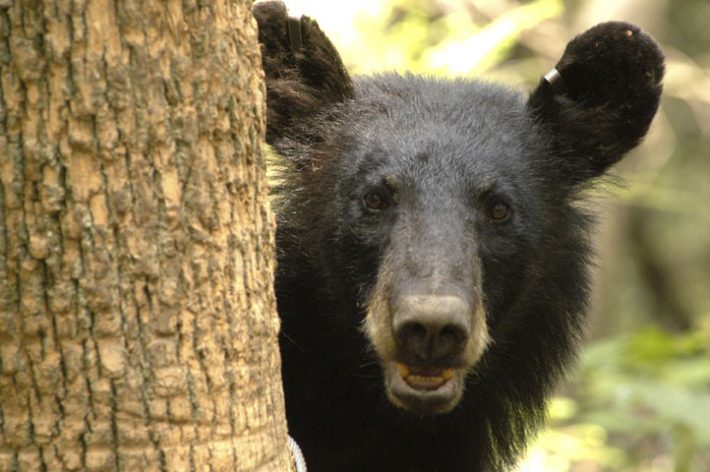 Fast-forward several decades into the future and much of the North American continent is likely to resemble today’s New Jersey, a landscape with an average of 1,215 people/square mile and suburban expansion transforming wildlands at double the pace than occurred during the 1980s.

Will there still be tolerance for black bears in human-dominated NJ?  Will we continue to allow bobcats in the Dallas-Fort Worth greenspace?  Coyotes foraging in the Chicago suburbs?  Cougars prowling around the outskirts of Los Angeles?  These are thorny questions that not only involve the population ecology of these species, but their interactions with human actors in complex social-ecological systems.

Following near extirpation in the 1950s, black bears in NJ had recovered to ~500 individuals by the mid-1990s.  Over the next 15 years, this population expanded and exponentially increased to between 3,200-3,400 bears, with densities in some areas on par with those reported in the salmon-rich, temperate rain forests of southeast Alaska.

Beginning in 1981, the New Jersey Division of Fish and Wildlife (NJDFW) had the foresight to begin investing in bear research, compiling one of the most comprehensive, long-term bear datasets in existence, which includes 5,185 captures that ear-tagged 3,533 unique individuals, and ascertained cause of death for 1,338 of these marked bears.  Further from 2001-2013, NJDFW received 26,582 public incident reports and spent >9 million USD on bear management, ultimately concluding that this level of conflict is fiscally untenable.  As a means to curb population growth, the 33-year black bear hunting moratorium was lifted in 2003 with a controlled 6-day harvest allowed in early December.  The 2004 season was closed by NJ Supreme Court order in response to public objection. A 2005 harvest occurred under the 2003 parameters, but was again closed from 2006-2009 pending the development and approval of a Comprehensive Black Bear Management Policy, reopened in 2010, and continues today.

“Black bears are a wonderfully charismatic species that elicit strong emotional responses in humans.  Watching my daughter tote around her beloved teddy, it is easy to see that our bear love-affair starts early,” says Jarod Raithel, the PhD candidate in the Department of Wildland Resources at Utah State University who has spent the past three years analyzing these data.  “However, an objective analysis of this capture-mark-reencounter data strongly indicates that recreational harvest will curb black bear population growth in the region, and is disproportionately removing bears that have a history of being a nuisance.”

Adult females, the main contributors to population growth for bears, are taken at much higher rates than their male counterparts in the NJ bear harvest.  Overall, nuisance bears have about a 7% higher probability of being harvested than non-problem bears.  This finding likely explains, at least in part, why nuisance behaviors reported (e.g., garbage visits, property damage, etc.) consistently and substantially declined in years following harvests, and exhibited parallel increases in years following harvest moratoria.  “Harvest is often viewed as detrimental to conservation – very understandable given the relentless human persecution of large carnivores.  Yet here, a well-regulated harvest may actually improve the probability that black bears persist, because removing the ‘problem’ individuals more frequently than those that stay out of trouble reduces human-bear conflicts, and may ultimately increase the cultural carrying capacity of New Jersey residents that live and recreate alongside bears,” says Raithel.

Large carnivores are increasingly recognized as indispensable pieces of fully-functioning ecosystems, and their extirpation can have far-reaching, unintended consequences for humans.  They typically range widely, and as they reside at the pinnacle of the food web, have inherently low population densities.  Even if the United States were to maintain, or even increase, the 14% of its land offered some level of protection against development, protected areas alone will not suffice to ensure the long-term viability of apex carnivores.  Thus, conservation of these influential and iconic species must focus on the wildland-human interface, where cultural tolerance for these sometimes dangerous predators may ultimately determine their persistence in the age of the Anthropocene.

A new study explores the use of touchscreen devices in experiments conducted on wild primates, with the aim of reducing the need for captive animals.