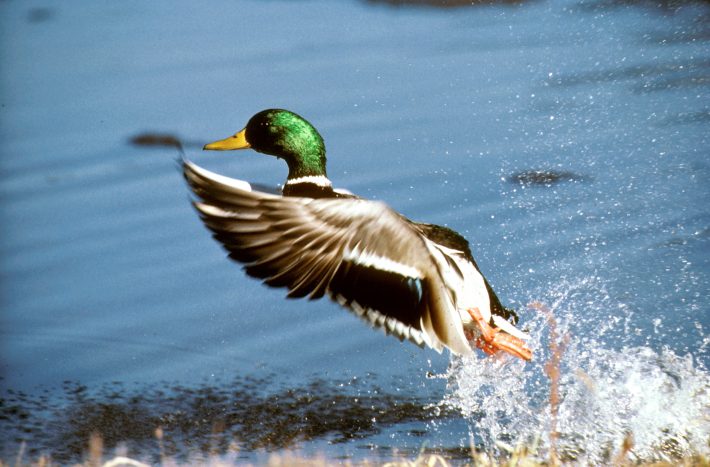 Erik Kleyheeg and Merel Soons of Utrecht University show that the daily movement behaviour of wintering mallards is highly predictable from the landscape they live in and that their daily flights contribute to maintaining the connections between wetland plant populations across increasingly fragmented landscapes. The researchers and co-authors are publishing their results today in the academic journal Journal of Ecology.

Mallards are among the most numerous and widespread duck species in the world, their global population estimated at approximately 19 million individuals. They are strong flyers, able to cover long distances at great speed (about 80 km/h) and part of the population migrates over long distances from their breeding areas to their wintering areas. Mallards are omnivorous and in their non-breeding range, during autumn and winter, they feed largely on plant seeds. Many of these seeds are not digested and survive gut passage. In this way, the mallards play an important role in transporting the seeds between wetland feeding and resting areas.

Effects of the landscape on mallard behaviour

Analysis of the movement behaviour of individual mallards carrying a GPS data-logger revealed that the daily movement patterns of wintering mallards are remarkably predictable. Mallards typically spend the daytime resting on a common roost, usually a large open water body. At night, they leave the roost to forage in and around wetland areas and agricultural fields, visiting 2-4 of such areas per night. Surprisingly, they have very high site fidelity and return to the same sites almost every night. This foraging behaviour remains similar across a wide range of landscapes. As a result, mallards have small home ranges and travel short distances between foraging sites in landscapes with many wetlands, while they have larger home ranges and travel much longer distances per night in landscapes with few and sparse wetlands.

Through these daily movements, mallards connect the wetlands in the landscapes they inhabit. Model calculations combining information on mallard movement behaviour, plant and seed traits and landscape configuration estimate that about 34% of seeds surviving digestion are dispersed towards roost areas, which may function as regional reservoir for plant biodiversity. About 7% of surviving seeds are dispersed between foraging areas. The seeds most likely to be dispersed are small, hard seeds, which are best able to withstand the mechanical digestion in the birds’ gizzard. Given the large numbers of seeds mallards ingest on a daily basis, they are likely to greatly contribute to plant dispersal and the connection between otherwise isolated plant populations across a wide range of landscapes.