The good news: Recognizing the incredible value of forests in providing habitat, storing carbon dioxide, purifying water and more, people around the world are working to restore forests destroyed in the past by human activities such as logging and farming. The bad news: In some places, it’s practically impossible. 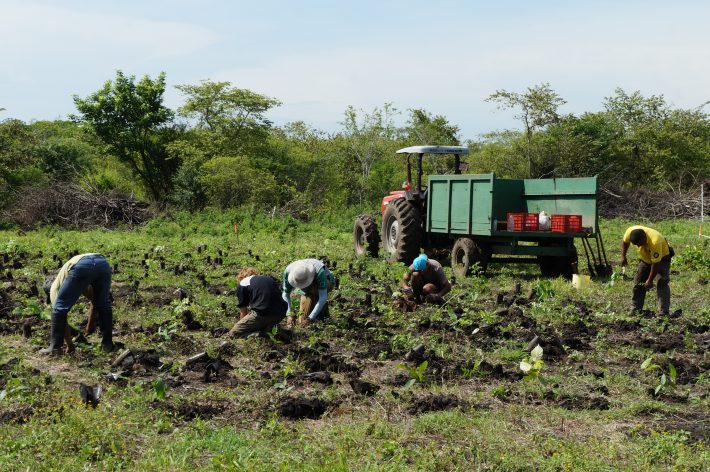 Among the toughest forests to regenerate are tropical dry forests, species-rich ecosystems found near the equator in regions that experience alternating wet and dry seasons. Over the past century most of these forests, which help keep water clean and provide valuable habitat for wildlife, were replaced by farms and cattle pastures. Now, as conservationists work to replant deforested areas, they’re finding that the already challenging, high-clay soils underlying them have been degraded to an extent that makes it hard for tree seedlings to sink their roots.

A new study led by graduate student Leland Werden and associate professor Jennifer Powers of the University of Minnesota College of Biological Sciences has uncovered some valuable information on ways to maximize the success of replanting efforts, bringing new hope for restoring these threatened ecosystems. The study was reported on September 22 in the Journal of Applied Ecology.

To find out what works best for reestablishing tropical dry forests, the researchers planted seedlings of 32 native tree species in degraded soil or degraded soil amended with sand, rice hulls, rice hull ash or hydrogel (an artificial water-holding material). After two years, they found that tree species known for traits that make them drought tolerant, such as enhanced ability to use water and capture sunlight, survived better than other species. Some of the soil amendments helped get seedlings off to a good start, but by the end of the experiment there was no difference in survival with respect to soil condition.

“This study is important for a number of reasons,” Powers said. “First, it demonstrates that it is possible to grow trees on extremely degraded soils, which provides hope that we can indeed restore tropical dry forests. Second, it provides a general approach to screen native tree species for restoration trails based on their functional traits, which can be applied widely across the tropics. Third, it is a great example of CBS researchers partnering with Costa Rican foresters to achieve a shared restoration goal.”

In follow up, the researchers have planted additional plots using the 12 top-performing species identified in the study. They are using these additional study sites to explore
the appropriate mixes of species to plant at different stages of a forest’s life.

“This continued work will help us to further develop best practices for the restoration of tropical dry forests,” Werden said.

The University of Minnesota College of Biological Sciences seeks to improve human welfare and global conditions by advancing knowledge of the mechanisms of life and preparing students to create the biology of tomorrow. Learn more at cbs.umn.edu.