Farming doesn’t always have to be harmful to bees. On the contrary, even though farmers on the Mexican peninsula of Yucatán traditionally slash-and-burn forest to create small fields, this practice can be beneficial to sweat bees by creating attractive habitats. The farmers profit as well since they depend on these insects to pollinate their habanero chillies. 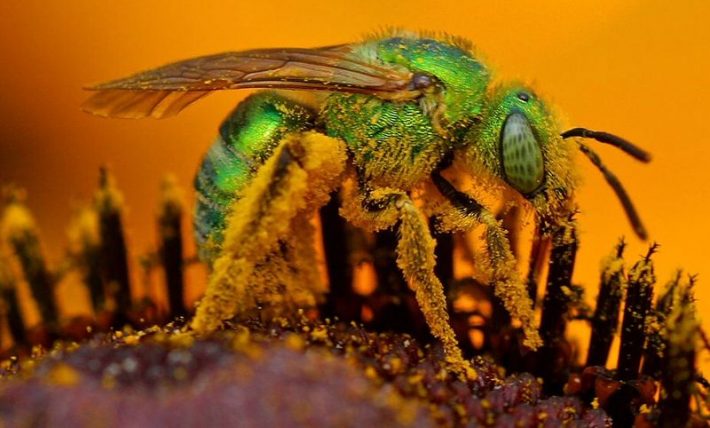 This discovery by an international team of authors, headed by Martin Luther University Halle-Wittenberg (MLU), was recently published in Journal of Applied Ecology.

Traditional farming practices on the Yucatán Peninsula originated with the region’s native inhabitants, the Maya. Small parcels of forest are cut and burned, then the land planted with various crops. Afterwards the land lays fallow for a few years. This results in mosaic landscapes. The cleared land lies adjacent to forests, other fields that are currently being farmed and stretches of pasture land. “This diverse range of habitat provides excellent conditions for native sweat bees,” explains Professor Robert Paxton from the Institute of Biology at MLU, where Paxton and PhD student Patricia Landaverde-González have studied 37 sites on Yucatán.

The researchers set out to discover how this type of traditional farming impacts biodiversity and bee populations. “One would assume that such a destructive type of farming would have negative consequences for the diversity of pollinator species – particularly bees,” explains Landaverde-González. Fewer bees mean that fewer plants can be pollinated, and around 70% of all plants grown on the Yucatán Peninsula depend on pollination.

The team of researchers collected and identified wild bees at all 37 field sites, experimentally measured the bees’ pollination services and carried out complex statistical analyses based on the collected data. The result: “The pollination of chilli plants is considerably better on the plots of land that are farmed in the traditional way, even when slash-and-burn practices are used,” says biologist Robert Paxton. There appears to be no direct, negative impact of moderate farming on populations of native sweat bees, the major pollinators of chilli. Paxton adds that other bee species are not able to adjust as well to these agricultural practices and their populations are therefore much lower. “Adjacent woodland seems to play a major role in supporting a diversity of bee species. We also found lower bee populations on cropland with little residual forest,” Paxton explains.

The peninsula is also known for its other prominent crops, including avocados, beans, passion fruit and star fruit. The researchers emphasise that these crops are pollinated by other bee species, which in turn, may depend on a more natural environment. In general, this study also shows how important it is to balance moderate farming practices with the protection of forests. This is the only way to maintain ecosystem health and the life-giving services it provides us.