The REED Network explore ways to handle challenging conversations and encourage effective allyship in the workplace. 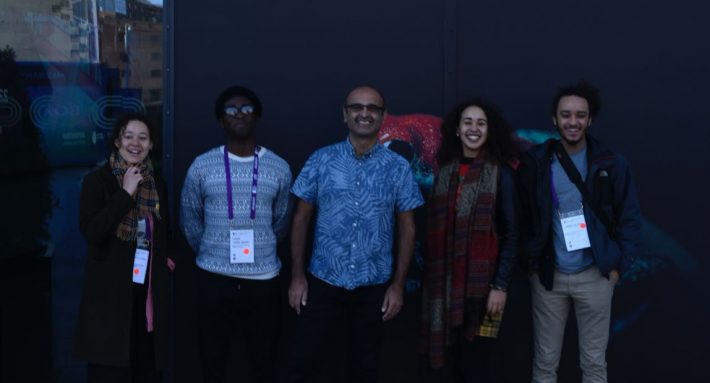 On 12th December 2021, members of the REED Ecological Network journeyed to Liverpool for Ecology across Borders (EAB2021), the joint annual meeting of the British Ecological Society (BES) and the French Society for Ecology and Evolution (SFE²). EAB2021 was the first in-person conference attended by the network. We intended to make the most of the opportunity to engage with such a large audience of ecologists. Over the course of the five-day event we ran two workshops, hosted a social event and discussed ideas to create a more diverse sector with the new BES President, Professor Yadvinder Malhi.

In this short piece we will provide an overview of the workshop ‘challenging conversations and effective allyship’ run by Reuben Fakoya-Brooks, the founder and Chair of the REED Ecological Network, and, Vice-Chair, Bushra Abu-Helil.

Privilege describes benefits that belong to people because they fit into a specific social group or have certain dimensions to their identity. You can have (or lack) privilege because of your race, gender, sexual orientation, ability, religion, wealth, and class, among many other characteristics. Having privilege means having an advantage that is out of your control and that you didn’t ask for. You may not even notice it until you educate yourself about its existence.

The importance of effective allyship and the burden of being a minority in the workplace, working towards diversity and inclusion, is highlighted in a study by Hekman et al (2017). Hekman et al (2017) found that when ethnic minorities conducted diversity-valuing behaviours, such as hiring and promoting diverse leaders and respecting gender, racial, religious and cultural differences, they were given worse performance reviews. Whereas, white or male leaders who engage in diversity-valuing behavior were not penalised, and may have improved performance reviews. Being a truly active ally can take the burden from minorities, improve their experience at work and make an organisation a more fair and inclusive place. But what are the steps to becoming a more effective ally?

The workshop introduced four key practices referred to as the ‘Four Ally Equality Practices’; ask, listen, show up and speak up. Ask others about their experiences and share yours, listen with empathy and seek to understand different perspectives, show up by being present, engaged and committed and speak up as an advocate, educating others about allyship. Acting as an ally is about action, being someone whose personal commitment to fighting oppression and prejudice is reflected in willingness to educate oneself about different identities and experiences. An ally is a verb, not an identity. Being a marginalized person takes no action as it is an identity. There may be times when you are in a position or marginalization, whereas other times there are opportunities for you to be an ally.

The workshop also discussed how to determine the best course of action when you are the victim of microaggressions in the workplace. A review by Washington et al (2020) was discussed, in which they identified three main ways to react; discern, disarm and defy.

Discern focuses on determining how much investment you want to make addressing the microaggression, think about the importance of the issues and the relationship with the perpetrators. If either or both are important to you, avoidance is the wrong approach. Express yourself in a way that honors your care for the other party, and assert yourself in a way that acknowledges your concern about the issue. Think about your feelings, if you’re feeling active negative emotions such as anger, it’s often best to address the incident later. If you’re confused, an immediate response might be preferable. If you’re simply exhausted from the weight of working while ethnic, maybe it is best for you to let it go. Lastly, think about how you want to be perceived now and in the future. There are consequences to speaking up and to remaining silent. Only you can determine which holds more weight for you in any specific situation. Mostly importantly, don’t feel pressure to respond but feel empowered.

Disarm focuses on disarming the person who committed the microaggression; explaining that the conversation might get uncomfortable for them but that what they just said or did was uncomfortable for you. Invite them to sit alongside you in the awkwardness of their words or deeds while you get to the root of their behaviour together.

Defy by challenging the perpetrator to clarify their statemen or action. Doing so gives you an opportunity to better gauge the perpetrator’s intent. Acknowledge that you accept their intentions to be as they stated but reframe the conversation around the impact of the microaggression. Explain how you initially interpreted it and why.

For those who have been accused of a microaggression remember that the intent does not supersede the impact. Seek to understand the experiences of your marginalised peers, bosses, and employees without making them responsible for your education. Believe the individual when they choose to share their insights; don’t get defensive or play devil’s advocate. Get comfortable rethinking much of what you thought to be true about the world and your workplace and accept that you have likely been complicit in producing inequity.

The workshop was a huge success with requests to speak at other conferences. We want to say a huge thank you to those that attended and made an active step in their journey of effective allyship, to minorities who attended and are fighting for more inclusive spaces in the workplace despite the personal cost and to Bushra and Reuben who put on a hugely informative workshop.

The Racial and Ethnic Equality and Diversity (REED) Ecological Network is a supportive platform for ecologists facing any form of racism and marginalisation within the ecological sciences and related disciplines. It is for people at all career stages and a source of inspiration for younger generations.

This article was first published in our membership magazine, The Niche, Spring 2022.

Are we exempt from ecology? Sarah Dalrymple explores how our anthrocentric behaviour has permeated ecological science.

READ MORE about Are humans separate from nature?
Tickets for the ark

Tickets for the ark

From wasps to whales – how do we choose what to save? In a new book, Rebecca Nesbit explores the moral quandaries behind conservation priorities.

Solid waste disposal represents a huge problem for most human societies around the world.