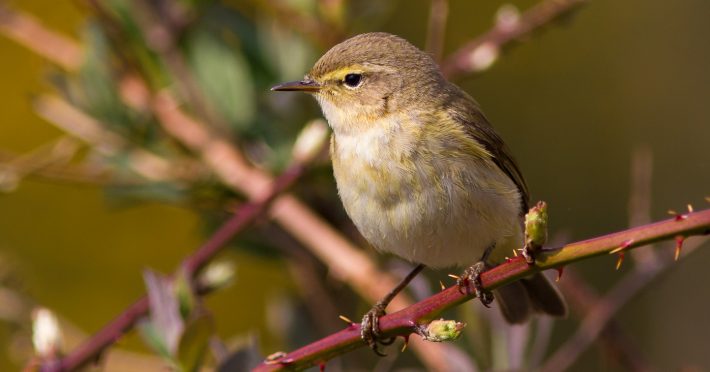 Common chiffchaffs living close to airports were five times more likely to attack a speaker emitting bird song than their counterparts who lived away from airport noise.

Birds living close to airports are exposed to extreme noise levels from jet engines that interfere with their ability to communicate with possible mates or potential rivals.

Noise from aircraft landing or taking off can reach 100 decibels at a distance of 100 metres – noise levels which can cause permanent hearing damage to humans as well as birds.

In addition to becoming more aggressive, the birds at the two airports studied for the research also changed their songs by singing at a lower frequency, indicating possible hearing loss.

The research was led by Manchester Metropolitan University and published in the Journal of Animal Ecology.

The findings have implications for animal conservation and environmental regeneration projects, particularly those close to airports. The findings will also help airport planners to understand an airport’s impact on surrounding wildlife, and how to adapt for wildlife conservation.

Researcher Dr Selvino de Kort, Senior Lecturer in Animal Behaviour at Manchester Metropolitan, said: “As anyone who has ever flown on an aeroplane knows, the engines are very loud. Airports are usually situated outside of the main urban living areas, often near nature reserves or national parks, and can be home to a wide variety of wildlife.

“We wanted to understand what impact the aircraft noise had on the nearby bird populations: does it affect them and in what way?

“We observed that the birds become much more aggressive and would attack the loud speakers, something we didn’t see in the populations living elsewhere.

He added: “This is important because air travel passenger numbers are expected to grow globally, increasing the need for new or expanded airports as we see with the current discussion surrounding a third runway for Heathrow airport.

“It’s important that we understand the impact of aircraft noise and ensure that birds – and other wildlife – are adequately protected.”

Researchers from Manchester Metropolitan University, Leiden University, and the University of Manchester, recorded the songs of birds close to Manchester airport and Amsterdam’s Schiphol airport – at a distance of between 180m and 2,100m from the runways – and birds living 20km away.

The birds decreased their song frequency, or pitch, in response to the aircraft noise which could indicate hearing loss. Laboratory studies of hearing-impaired birds show a similar change in song, but this is the first time this has been observed in wild birds.

The higher levels of aggression may be the direct result of higher stress levels as a result of intermittent aircraft noise exposure.
The research was conducted in partnership with Manchester Airport.