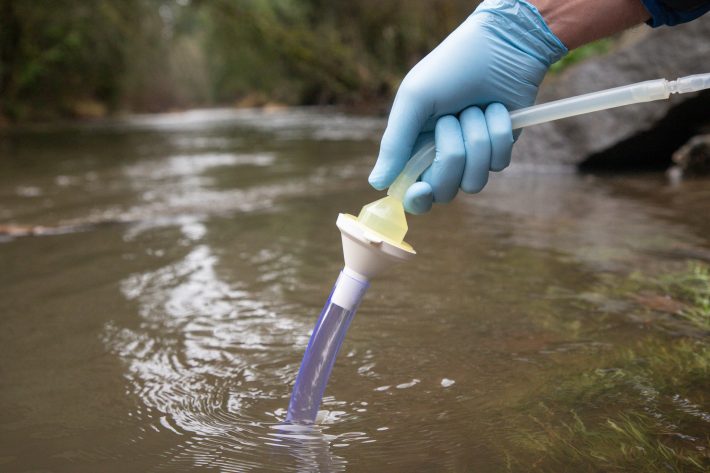 In 2015 the inventor of the Keurig disposable coffee cartridge (K-Cups) told reporters that sometimes he regrets ever inventing the technology. The single-use design simply produces too much non-recyclable trash. Well, that very same problem is what ultimately led to the creation of a self-preserving filter for environmental DNA (eDNA); a recently reported Practical Tool in Methods in Ecology and Evolution.

eDNA scientists rely on single-use sampling equipment because eDNA surveys are highly sensitive to potential contamination. “We started out simply looking for biodegradable plastics that could be molded into a filter housing, with the objective of reducing plastic waste.” says Dr. Austen Thomas who led the team of researchers and engineers who invented the Smith-Root eDNA Sampler (also reported in Methods in Ecology and Evolution). “That’s when we realized that some of the biodegradable compounds function by being highly hydrophilic.”

The hydrophilic plastic turned out to be the secret to creating a self-preserving eDNA filter. DNA rapidly regrades from enzyme activity, so most DNA preservation methods (e.g., ethanol, various buffers) remove water from samples to prevent enzymes from functioning. Unfortunately, the liquid preservation processes often expose eDNA filter membranes to possible contamination. By creating a filter housing effectively made of desiccant, the team completely removed the need for a preservation step from field eDNA protocols.

“This really simplifies the eDNA sample collection process” says Dr. Caren Goldberg, a coauthor on the study. “It also reduces the amount of time and training required for field staff to effectively collect eDNA samples.”

To determine if the self-desiccating filters are an effective means of preservation, the research team conducted a 6-month preservation trial with eDNA filter samples preserved two ways (ethanol, self-preserved). Both preservation methods performed well, with no significant degradation of eDNA after 6 months of storage at room temperature.

“Our more surprising finding was the high level of eDNA on the self-preserved filters in the field study” says Thomas. The researchers found that the self-preserved filters contained almost twice the eDNA/L of ethanol-preserved samples in a small-scale field study investigating the presence of Columbia spotted frogs. “It should be considered a preliminary finding until more field trials are conducted, but it is quite compelling” says Thomas.

The development team is now sending samples of the self-preserving filters to eDNA researchers in different geographic regions to test the performance of the filters in a variety of field conditions. Research groups that are interested in Beta testing the new filters are encouraged to contact the development team.

Beyond simplifying the eDNA sample collection process, the team’s ultimate goal is to make the filters housings and packaging completely biodegradable, but they may have to wait for new materials to be developed. “Most of us got into ecology because we care about the ecosystems we study” says Thomas. “The last thing we want to do is leave a legacy of plastic trash.”