On 8 November, Professor Tim Benton opened the Scottish Biodiversity Science Conference with a fascinating speech on the agricultural system and its impact upon biodiversity 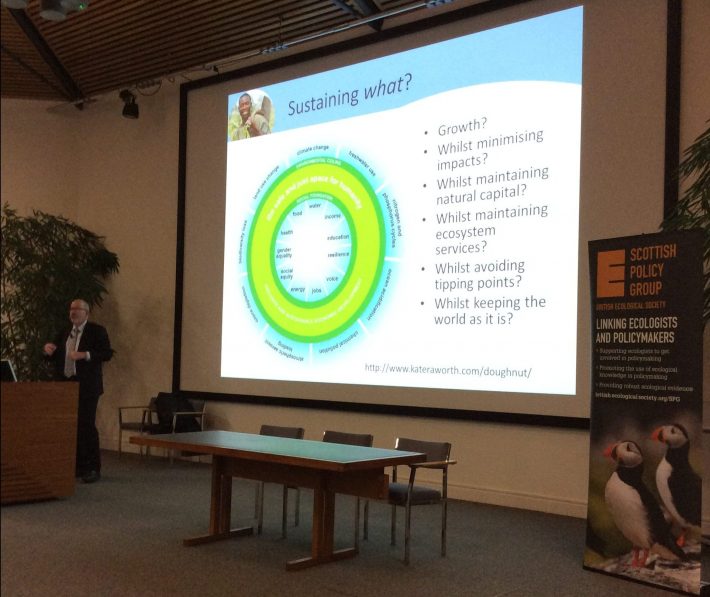 The Scottish Biodiversity Science Conference (jointly organised by BES, SNH, RBGE, CIEEM, RSPB, SBS Science Support Group and NHBS) opened on the evening of 8 November with a keynote address from Professor Tim Benton. Professor Benton’s fascinating speech on agriculture, nature and biodiversity provided a stimulating introduction to the following day’s talks, which focused on connections between people and the environment. Below I summarise what (in my view) were his key points, grouped around three guiding themes:

Professor Benton opened his talk by explaining that intensive agriculture and food production contribute one-third of global greenhouse gas emissions and are a leading cause of declining biodiversity. A business as usual emissions trajectory could put the world on course for 4 degrees of warming, leading to a possible 30% decline in agricultural production. In this context, the growing similarity of diets worldwide, driven by intensive agriculture and global trade, poses a threat to the resilience of the global agricultural system. Business as usual in agriculture, where cheap food is produced in an unsustainable manner, results in overconsumption (globally, more people are now obese than underweight), ill health and huge quantities of food waste. As well as causing socio-economic problems, this model has a range of negative impacts on the environment. While economic growth and new technology have benefits in the short-term, they cannot compensate indefinitely for the depletion of finite natural capital. A food system that delivered nutrients in an efficient way would only require half the current land volume dedicated to agriculture.

‘Extinction of experience’ and lost connections

The environmental impact of food is hidden from consumers by long causal chains, which most people lack the time or inclination to pursue. Professor Benton argued that this situation contributes to a lost connectivity with food and the natural world, where people see meat as vacuum-packed. Instead of living in communities where the agricultural process is a familiar part of everyday life, many citizens in the developed world are only familiar with the final link in the process; buying food from the supermarket. For many residents of big cities the ‘extinction of experience’ has become common; lack of direct contact with nature and wilderness breeds apathy toward environmental concerns and reduces access to experiences important to our flourishing.

Professor Benton acknowledged the sense of disempowerment felt by many in the face of such large-scale global issues. Complicated food supply chains export issues globally and power is concentrated in the hands of a few; it can be daunting for ordinary citizens to contemplate changing this system. He emphasised the importance of the ecological community articulating issues around agriculture, food and nature and speaking out to influence policy change. Rediscovery of this sense of agency can encourage the transformation of norms and lifestyles at the societal level, which may be a more effective strategy than passively waiting for government to solve the problem. Encouraging people to recognise how a consumerist lifestyle contributes to the diminishment of nature can raise the issue’s political salience and drive change.

A food system that delivered nutrients in an efficient way would only require half the current land volume dedicated to agriculture.

The speech provided a stimulating introduction to the conference, emphasising that contributions by individuals can tackle systemic, large-scale problems. Professor Benton’s call for the ecological community to articulate the most pressing issues was developed upon by range of speakers, drawn from both academia and the public policy community. By bringing together scientists, academics and policymakers, the conference offered a venue for the collaborative approach necessary to underpin transformational change. The key points from these talks will be summarised in a forthcoming post.