What’s good for livestock can be good for wildlife

With protected areas only covering 15% of the earth’s surface, it’s essential to conserve biodiversity outside of these places. Research published in the British Ecological Society journal People and Nature looks at southern Kenya to explore how maintaining large open spaces can allow herders, their livestock and wildlife to co-exist. 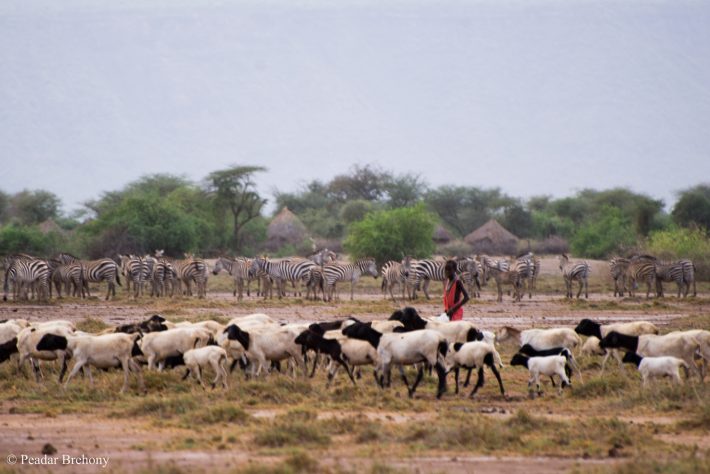 Natural history documentaries set in Africa abound with enchanting scenes of the continent’s wilderness and wild animals. But something is missing from this archetypal African scene: people and their livestock living alongside wildlife.

You’re probably used to hearing that livestock ruin the land and are bad for the planet. After all, cattle do release greenhouse gases, and large swathes of the Amazon forest have been cleared for ranching. There have been harrowing stories of livestock invading national parks and herders spearing lions and elephants.

But sustainable livestock rearing can help conserve the world’s remaining rangelands, which make up 40% of the world’s land area. These habitats are defined by low and erratic rainfall, and host large herds of migratory wildlife, like bison and wildebeest. They’re also grazed by domestic livestock, and include the North American prairie and the savannas of East Africa.

Partitioning off these vast regions from people and their livestock has been the mainstay of conservation practice for over a century. Protected areas now cover 15% of Earth’s land surface, and American biologist and naturalist E.O. Wilson has recently called for half the Earth’s surface to be set aside for biodiversity, primarily by excluding humans.

But despite increases in the area designated as protected in countries like Kenya, wildlife is still declining, and much of the remaining wildlife and biodiversity is found outside of protected areas.

We, together with many others who work in conservation, believe that continually expanding protected areas that are devoid of people is impractical and misguided. Instead, we think habitat conservation should value rural people, and include them, their land and livelihoods within conservation projects that span entire landscapes.

Threats to livestock are threats to wildlife

When rain does fall on rangelands, wildlife often need to be able to migrate hundreds of kilometres to forage for the flush of vegetation that follows. During droughts, wildlife need the last patches of vegetation left by these downpours and the remaining trickles or puddles of water.

But space for wildlife is now rapidly shrinking across rangelands. From East Africa, to Tibet and Mongolia, urban areas are growing, while crop farming is expanding and fences are springing up to demarcate ownership. All of these processes are breaking up rangelands into small, unsustainable patches, which are easily degraded, and prevent wildlife from accessing the water and grass they need.

The very same threats facing wildlife populations are also faced by herders and their livestock. Livestock herders need to be able to cover long distances to exploit patchy rainfall and their nutritious pulses of vegetation. Without that, the health and value of livestock declines and livelihoods suffer.

East Africa’s rangelands are home to the largest and most iconic populations of large mammals on earth, such as the million strong Serengeti-Mara wildebeest migration, which inside and outside protected areas are falling. People and wildlife have coexisted here for millennia, but herders are often blamed for this, as their livestock compete with wildlife for forage and water.

Both wildlife, and livestock, need large amounts of space, across large landscapes, to survive the worst droughts, and to reproduce and stay healthy. There is much to learn from traditional tenets of herding practices in rangelands, and how they allowed herders to thrive alongside wildlife.

Opportunities for wildlife conservation by overcoming threats to livestock

In our research, we found that wildlife in southern Kenya can be protected by starting with the desire of herders to improve how they manage livestock and the health of their herd.

Before colonial changes in livestock policy, the Maasai in southern Kenya managed their livestock over vast areas using principles they call “eramatere”. The rules on where to graze, and for how long, were enforced through close social ties which tightly linked people and their extended families together. It’s much harder to break the rules when it jeopardises the well-being of a close friend or family member. This compelled individuals to make decision that benefited the whole community.

These principles are fading as Maasai culture changes, and so it is vital to understand how we can support or rekindle these principles to benefit wildlife and livestock.

We show that in Kenya’s South Rift Valley, communities and NGOs work together to overcome these problems by adapting and improving traditional governance systems, and reinforcing social ties all across multiple scales. This improves the ability to manage livestock at a landscape-scale and, consequently, preserves rangeland health. In doing so, the communities are indirectly preserving the resources and mobility that wildlife too needs to survive.

Decisions made about grazing benefit the entire community, not just individuals, and grazing can happen at a scale which is large enough to access erratic vegetation and water, and rest those patches of grass which have been overgrazed or that need to preserved for prolonged drought. This means that people have healthier livestock, which are less likely to die during droughts. Crucially, this can increase the value of livestock, which can potentially reduce the threat of land conversion to urban development, crop agriculture or land speculation, by generating sufficient economic returns so that people don’t feel they need these alternative income streams to send their children to school or support their families.

Conservation from the inside-out

By scaling up livestock management in this way, communities are preserving rangeland health and averting rangeland fragmentation. This is indirectly helping wildlife to survive as it allows wildlife to access the forage and water they need too.

Space and mobility are important for wildlife, but so too is ensuring that they have a place in people’s lives. Lions and other carnivores kill livestock, zebras eat grass needed for grazing, and elephants can injure or even kill people. Offsetting these losses is difficult. Eco-tourism is one option. The economic returns provided by tourists in equitable partnerships with the livestock herding landowners can help to offset these costs, and maintain wildlife numbers across much of Kenya’s rangelands.

We dub this kind of approach “inside-out” conservation. If we focus on improving the sustainability of livestock production systems in rangelands – including traditional ones such as the Maasai, and even commercial ranching – wildlife can also benefit. Better yet, this doesn’t require large sums of money to incentivise landowners, and importantly, it doesn’t require conservation NGOs to impose top-down rules and regulations on herders, which can cause conflict between herders and conservationists.

You can read the article for free here:

Peter Tyrrell is a PhD student at the Wildlife Conservaiton Research Unit, University of Oxford.

Peadar Brehony is a PhD student at the Department of Geography, University of Cambridge.

David Western is the chairman of the African Conservation Center.