By Kate HowlettPhD student at the University of Cambridge

The lecture theatre at Bristol Zoo’s Clifton Pavilion buzzed in anticipation of hearing what the panel had to say about the purpose of nature programmes – are they vital for saving the planet or just great entertainment? With documentary producers, presenters and researchers at the table, there were plenty of disagreements to come. 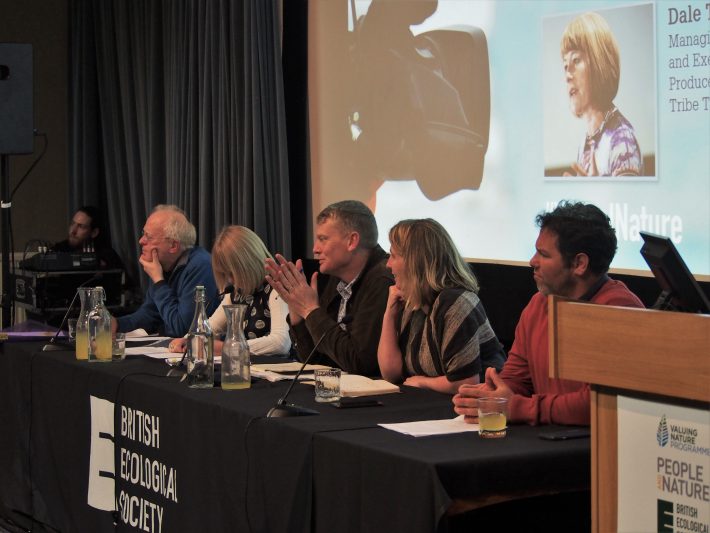 The debate marked the close of the Multiple Values of Nature symposium, organised jointly by the BES journal People and Nature and the Valuing Nature Programme, so the question was pertinent to the themes discussed at the meeting. Do wildlife programmes foster certain values of nature? Do they depict what is really happening in the world? Who decides what stories get told? And what are the implications for action to save the planet?

Straight off the bat, Creative Director of the BBC Natural History Unit, Mike Gunton, interrogated the entertainment/force-for-change dichotomy: “Isn’t the question too binary?” Great entertainment is not mutually exclusive with educating and informing to change the perspectives and behaviour of the audience. As a collective, these programmes serve to put our lives into perspective, reaching a vast audience, made up mostly of those who are not actively interested in the natural world. And we reach this audience by making programmes that are first and foremost entertaining. 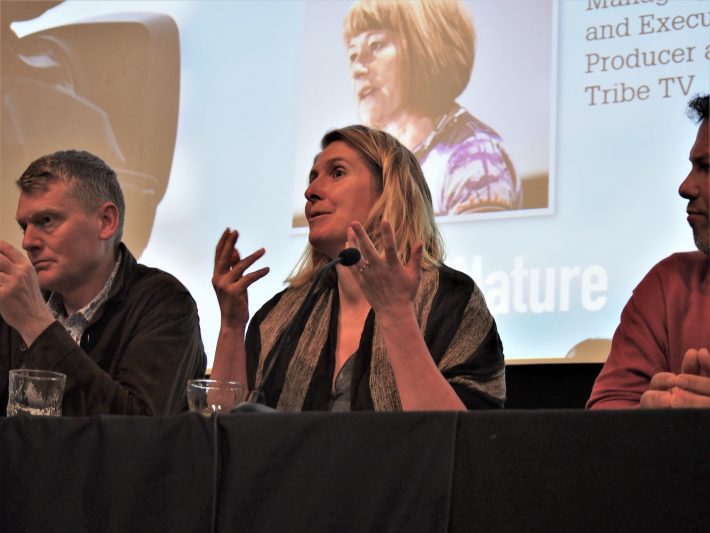 In response, Dale Templar, Managing Director and Executive Producer of One Tribe TV argued that “doom and gloom will not work”. The risk of portraying climate change devastation everywhere, all the time, is that you portray it as a common cold: ubiquitous and inevitable. People switch off, and we need ‘switch-on’ television to empower the masses. The answer is entertaining films that inspire us to save the planet and empower us to feel that we can.

Behaviour will not change from facts alone, agreed Assaf Shwartz, conservation biologist at the Israeli Institute of Technology. People need to forge personal connections with nature: if people do not know, they will not care. The key question is whether nature documentaries serve to increase this distance between us and the natural world or to decrease it. Emotional messages are the most potent, but we need to ask which behaviours we are trying to change. Until we know the answer, he reasoned, we cannot unpick the purpose or success of nature documentaries.

A lively debate ensued, and the chair, Tom Heap of Countryfile and Costing the Earth, had his work cut out in refereeing exchanges from the panel, although some of the sharpest and most observant interjections came from the audience. 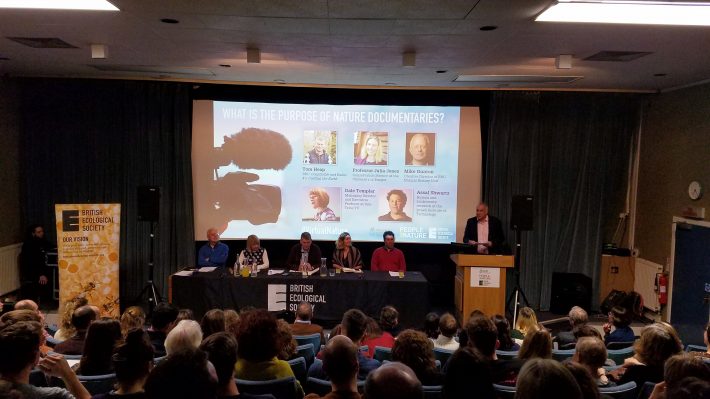 Big questions arose: how can filmmakers find a balance between creating beautiful films that can compete in a crowded market, and at the same time be brave enough to show uncomfortable truths of the conflicts between people and nature? How much power do filmmakers have compared to commissioners, and who ultimately makes the decisions on what gets made? And how realistically can we measure impact?

Remarkably, despite the slamming of pens on the table, impassioned challenges and humorous digs, a consensus was amiably reached. Professor Julia Jones insisted that films depicting the harsh realities for nature can still be made to be inspiring. We must reveal the heroes who are fighting for the natural world, who provide innovation and hope in the face of calamitous destruction and overwhelming odds. These are the narratives that will galvanise action.

Perhaps what we need are people-and-nature documentaries

Dale Templar had huge success in producing Human Planet, and is currently working on Heroes of the Celtic Deep; Mike Gunton produced Planet Earth II, which dedicated a quarter of each episode to behind-the-scenes footage of the crew interacting with their subject matter: in short, there is appetite for human stories. As Assaf Shwartz neatly summarised, the secret is to emphasise the innate connection humans have with the natural world and to seek to rebuild this; valuing nature through its relationship with the human experience will never go out of fashion.

Perhaps the programmes that will save the planet are not simply nature documentaries, but people-and-nature documentaries. As Kevin Gaston, editor-in-chief of People and Nature highlighted at the Multiple Values of Nature symposium, “Ecology can no longer pretend it is an isolated discipline.” Environmental challenges require all hands on deck, and we cannot continue to perpetuate the human/nature divide. Our place in the natural world is the biggest challenge for the planet, but it can be the solution too.

You can watch the full debate here.