Best of Belfast: highlights from the 2019 Annual Meeting

We have pulled together a summary of our favourite moments from the 2019 Annual Meeting in Belfast. 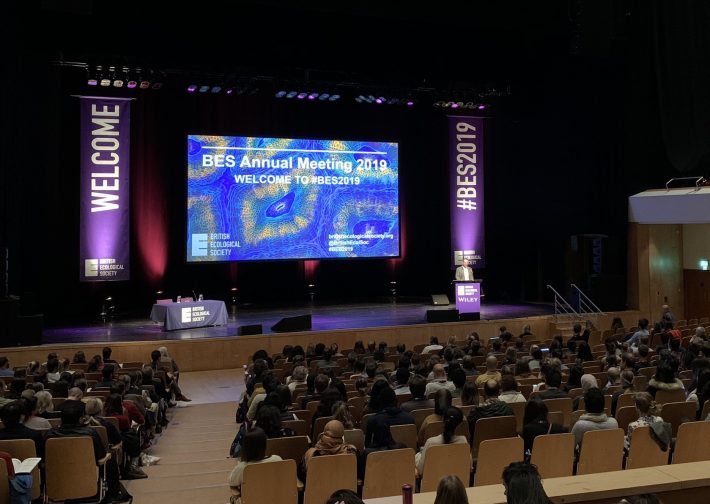 We welcomed 1,226 delegates to our 2019 Annual Meeting in Belfast between 10-13 December to celebrate global ecology. With so many things going on, we have selected the best bits of the main activities and events. For more, see the hashtag #BES2019 on Twitter!

How wild is wild?

The conference was preceded by a policy debate on rewilding the island of Ireland on Monday 9 December, in collaboration with the Irish Ecology Society and chaired by Ella McSweeney, Irish Food and Farming journalist and presenter.

Speakers Senator Ian Marshall, Jennifer Fulton, Lorcan O’Toole, Kieran Hickey, Kim Ward and Jaime Dick contemplated the complexities of what rewilding is, how it can be done on both small and large scales … and whether wolves could ever return to Irish shores.

Delegates started to arrive on Tuesday morning, and our first day kicked off with pre-conference workshops which included early-careers workshop and modelling in R.

At the same time, the exhibition hall was being set up. We were delighted to have so many international societies for the first time, and local institutions like Queen’s University Belfast, as well as regulars like Oxford University Press, the National Geographic, and our plenary sponsor Wiley.

In the evening, our fresher’s function was packed with first-time delegates or those who were attending on their own. Then the welcome mixer itself started, a great place for networking and exploring the stands in the exhibition hall.

Afterwards we headed to the Black Box for the infamous Science Slam. Compere Emer Maguire entertained with her musical and comedic talents and introduced six fantastic acts who gave unique insights into their research through music, comedy, drag, Christmas cards and more!

The BES President Richard Bardgett officially opened the conference on Wednesday, followed by the first plenary from Jonathan Chase.

#BES2019 is well underway after a brilliant plenary lecture from @Jon_Chase88 talking about the importance of synthesising different views amid a global extinction crisis and using the concept of scale to do so. pic.twitter.com/aurgOjTUyE

Throughout the conference, real-life creature soundscapes could be heard in the auditorium before speakers, courtesy of Wildlife Acoustics.

On both Wednesday and Thursday, delegates had a choice of a huge array of sessions to attend.

My highlights of #BES2019 so far has been finding out in @SammyMason25’s @MammalWeb talk that when 400 kids were asked to name a mammal that lives in the uk, 3 said Mammoth, 1 said dinosaur and 1 said haggis. Heroes. https://t.co/dmuLguaA6U pic.twitter.com/AnKzUa3JyB

One of our most popular stands was the ‘Draw Your Study Organism’ table. Who knew ecologists could also be budding artists?

The #DrawYourStudyOrganism wall is my favourite part of #BES2019 so far, even though my artistic ability can't quite so my birds justice… pic.twitter.com/udx7ZGMIvX

Delegates could also take part in conference bingo! Some tasks were more difficult than others…

Whoa who decided to make the #BES2019 bingo extra hard this year pic.twitter.com/AYneCTObcI

We held our 39th AGM to allow members to vote on new appointments and have a say in the running of the Society. Our new Strategic Plan was approved and can be found here, and the new Board of Trustees can be found here.

Researchers presented their incredible work at the poster sessions in the evening. We were delighted to see so many interesting, diverse topics from all over the world!

The evening concluded with an array of socials, including many from the Special Interest Groups (SIGs). These ranged from talks and dinners to a trip to the pub and quizzes.

Our quiz evening is is getting underway and the mountain of pizza has just arrived!! Still time to join us this evening at the Dark Horse! @BESConservation @BES_Tropical #bes2019!! pic.twitter.com/arhyuNc6dl

The second plenary of the meeting was delivered by Esther Ngumbi on Thursday morning.

On average, each paper will only be read by 10 people.

Inspiring talk by @EstherNgumbi at #BES2019 on our responsibility of moving beyond scientific publications and making research meaningful to the public. pic.twitter.com/DmGHnrLJqq

Afterwards, we were honoured to present this year’s awardees at the awards ceremony.

A very exciting moment was the launch of a new journal, Ecological Solutions and Evidence as part of Applied Ecology Resources. Check it out here. Meanwhile at the BES activity stand, delegates could pitch their latest research and ideas to our publication editors in the Speed Review session.

Thursday finished with the ever-popular conference dinner, this year held at the magnificent Titanic Belfast. As well as plentiful food and drink in a sensational setting, delegates danced the night away with a ceilidh, a conference favourite!

Helen Roy delivered the 12 months in ecology lecture on Friday morning, while mince pies and mulled wine were served at the coffee break.

Research about how pine martens are supporting the recovery of red squirrels in Ireland, presented to delegates in the morning, was also featured in the Times, the i newspaper and the Irish News.

Do you love squirrels?️? (TBH who doesnt?)

Do you want to hear why the pine marten's recovery is important for their management?

If yes, head along to Rm 3B at 14:15 to hear @JoshuapTwining explain the story behind the headlines https://t.co/aZCF0WyEmr

We saw some excellent Christmas jumpers that brightened up the day, and we awarded the best ones with a Christmas treat.

Congratulations to the winners of our Christmas Jumper competition! We hope you enjoy your chocolate prizes ? #BES2019 pic.twitter.com/l6v6SA4ih0

A final set of sessions concluded the day, and we want to thank all those who contributed for their fascinating, engaging and sometimes humorous presentations!

My favourite slide so far at #BES2019 ? pic.twitter.com/RZb81MaKmH

The final plenary was given by Richard Bardgett, his last act as President as his term ends. We welcome Jane Memmott, the incoming President from 2020.

Final address at #BES2019 by @BritishEcolSoc President Richard Bardgett @SoilEcolUoM reminding us that 1/4 of all life on all Earth is in soil! pic.twitter.com/fpJLs0PCwg

We couldn’t have done without the outstanding ICC staff, and we are forever grateful for their hard work and generosity!

A huge thank thank you to all the staff members at the @BelfastICC who went above and beyond and made #BES2019 possible! pic.twitter.com/hlAjxHMLts

And a massive thank you to our Helpers, who we counted on so much during the conference.

During the weekend, delegates attended tours around Northern Ireland, from Giants Causeway to the set of Game of Thrones.

Had a wonderful time at #BES2019 rounded off by a wonderful tour of nearby sites including the famous Giant's Causeway! Thank you to all my friends, old and new, and to everyone there for being so friendly making my first big conference such a great experience! ?? pic.twitter.com/PnbhNXDWE0

We were sad to see #BES2019 come to a close but are already looking forward to #BES2020 in Edinburgh! Hope to see you there!

Urban growers in Brighton and Hove were able to harvest 1kg of insect-pollinated fruit and vegetables per one metre square, which is within the range of conventional farming.

Scientists at Lund University have discovered for the first time that it is possible to detect insect DNA in the air. This offers scope for exploring a whole new way to monitor terrestrial biodiversity.

Indigenous people in the rainforests of Gabon have knowledge of plant and fruit-eating animal interactions that exceeds that found in academic literature.